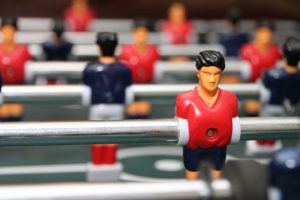 Bonzini foosball started way back in 1960 when French cafés became populated by these beautiful coin operated football tables. Their enduring appeal and bullet-proof construction became the preferred past-time of a generation.

How to win your foosball games: just simply implement a couple of the following tips and in no time you will be the undisputed champion of table football in your group of friends, home, village – and maybe even your country – if you are lucky.

For anyone who has been on earth for at least twenty years, the exhilarating yet humble game of foosball (which is also referred to as ‘fuzball’ or ‘table football’) will surely have encountered it during their childhood. How much you embraced it will of course widely vary but at some point there would have been a foosball table someplace in the background, whether at a friend’s house who owned his own table, at a birthday party, youth club or other places where you hung out.

Spinning is not only illegal but also is seriously damaging to your attempts at trying to make improvements to your foosball game. Among casual and novice foosball player it is a common misunderstanding that spinning is a great way to disrupt the rhythm of an opponent in midfield and that, in terms of shooting, it’s the best way of getting maximum power from a shot. This is not true since spinning actually results in you losing control of all of your players and your pass or shot is turned into an effort of winning the lottery. There have been many goals scored due to errant spins that have resulted in the ball being shot backward, past an unsuspecting and helpless goalkeeper.

Learn how to do the ‘sideways shunt’

Whenever a defender is directly in front of your striker, you might be wondering what you should do. This same thing is true when you are trying to play the ball from the back when the opponent’s forward is blocking you. The reaction of the average foosball player to the situation is desperation, frustration, or panic and they end up just hacking the ball forward (which leads to a rebound off of the opponent that is potentially devastating) or they end up taking the risky back pass ploy. You want to learn how to just tap at the ball sideways over to the player next to you and that will cause your opponent to be wrong-footed immediately (or wrong-footed at least to the point where they can be when stuck to a fixed point on the bar).

Use your goalkeeper correctly

This can definitely be a difficult task. Often you are tasked with having to use your weak hand to manage your goalkeeper, and with the short reaction times and sharp reflexes that are required, that can be many a player’s downfall. But when the goalkeeper is used to the proper and full extent, he can, just like with ‘real life’ football, be a strength for you instead of a weakness – and even a source of the odd ‘pot shot’ goal. The key to reaching the top of this game is to learn how to master the art of being able to control your goalkeeper using one hand while at the same time managing the ball with your other hand in the outfield (so that you are prepared for sudden strikes or rebounds).

Prepare yourself for dealing with hostile elements

Most people never make it all the way to the top. That is just the cruel and sad reality of foosball. This results in most people spending their time playing foosball in domestic settings. Of course, that exposes the table to all sorts of disruptive elements. For example, pets and siblings. So no matter how pristine your own table might be, don’t let yourself get too comfortable. You will not be judged by having the best resources. Your abilities will be really put to the test only when half of the handles are missing, your foosball is all chewed up (both the real one and your two spares have all been eaten by your brother or dog) and the table has a huge slant to it.

Master the art of the ‘dummy’

This is similar to the real-life dummy but requires a lot more poise and technique. Pretend you are about to take a shot, by making those same powerful wrist movements, but at the last second stop short, perform a sideways shunt quickly over to your strike partner and then slot the ball directly into the net. This is guaranteed to pull one goal out at least during a critical part of the game.